All respected leaders and members of NAC please note:-

The police administration did not give permission for the national convention due to various reasons like   Covid and the large number of 60 + old pensioners present from all the states of the country, etc.

The President of NAC, Commander Ashok Raut, after speaking to the important leaders and chief coordinators of the state and center took this decision with unhappiness and said that –

Considering the sentiments of all the pensioners of the country, the National Convention of NAC shall now  be held in Lucknow (Uttar Pradesh) at the appropriate time and the same  will be announced at the right time.  Along with this, the NAC Chief also expressed regret for the inconvenience caused to all the Pensioners.

It should be known that the old pensioners were fully prepared to participate and attend the national convention in maximum number from all the states and all the districts/divisions of Uttar Pradesh.

It should also be known that the NAC leaders of our Uttarakhand and Uttar Pradesh worked hard and got the permission for  the meeting venue from the concern organization.They had arranged for accommodation and worked hard towords making  the convention a success.  But due to non-receipt of permission by the administration, there is an  anger brewing against the government/administration among the pensioners.

Also, due to cancellation of many trains and due to section 144 etc., anger among pensioners is at its peak. Brothers and sisters who have made reservations are requested to get their reservations cancelled immediately.

Salute  to the leaders / members of all the states of the country including Uttar Pradesh and Uttarakhand. They  had also put their efforts, time and money for the success of this national convention.

In this regard, NAC Chief Hon Commander Ashok Raut’s statement is being broadcast separately. 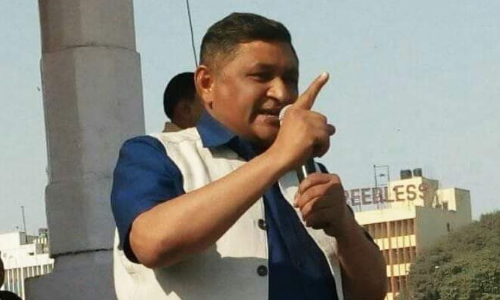