Minister for Labour and Employment, Shri Bhupender Yadav, on the occasion of beginning of Iconic week today said that the recently launched eSHRAM portal has established itself as an important instrument towards fulfilling the motto of “Sabka Sath – Sabka Vikas – Sabka Vishwas – Sabka Prayas” and reaching 25 crore registrations milestone in less than 6 months shows the power of collective will.

Shri Yadav stated that in the coming days eSHRAM portal is going to provide a foundation of “Amrit kal for garib kalyan”, based on which many schemes and programs can be designed to provide direct benefits to the Unorganised Workforce of the country.

Felicitated leading States/UTs/CSC-VLEs with e-SHRAM Awards. The government, under PM Shri @narendramodi ji’s leadership, is committed to continuing the efforts for welfare of our unorganised labour force.#AmritMahotsav #ShramevaJayate pic.twitter.com/trQokJ2eqb

Shri Yadav congratulated all and felicitated leading States/UTs/ CSC-VLEs with eSHRAM awards and asked to continue the efforts for the welfare of the unorganised labour force which comprises about 80% of total workforce in India. Uttar Pradesh, Odisha and Uttarakhand were among leading States whereas Jammu Kashmir, Delhi and Chandigarh were among leading UTs in terms of registration coverage.

On the occasion, the labour Minister announced that the eSHRAM portal is now also made available on UMANG mobile application, through which unorganised workers can register themselves with ease. They are empowered to register themselves on eSHRAM from the convenience of their home.

The Union Minister also announced that eSHRAM is now also integrated with National Career Services (NCS) portal, which is a one-stop solution that provides a wide array of employment and career related services to the workers. Through NCS, the portal will provide employment opportunities to the unorganised sector workers in their vicinity and abroad.

Launched ‘Donate-a-Pension’ programme at my residence by donating to the gardener. It is an initiative under (PM-SYM) pension scheme where citizens can donate the premium contribution of their immediate support staff such as domestic workers, drivers, helpers etc.#AmritMahotsav pic.twitter.com/4R5laKnIul

Under the scheme the donor can pay contribution on behalf of the helper for any length of time. Hence this initiative shall allow the employer to secure the future of the ones who ensure one’s daily functioning.

The Minister himself started the day by donating pension to his domestic workers/helpers and wished that they will have better old age life as there will be old age protection to domestic workers in the form of monthly assured pension of Rs.3000 through PM-SYM pension scheme.

On the occasion, Minister of State, Shri Rameswar Teli stated that eSHRAM  being the first ever comprehensive database of Unorganised workers, will not only empower the marginalized workforce of the country but will also provide strategic inputs for evidence-based policy making.

Shri Sunil Barthwal, the Labour Secretary stated that e-SHRAM portal is working towards fulfilment of vision of Hon’ble Prime Minister to “connect every entitled person with the government’s insurance, pension and housing schemes. We have to move ahead with a mindset of cent percent achievement”. Shri Barthwal said that eSHRAM is going to be immensely useful database for the central government, Ministries and the State Governments in planning and delivery of social security benefits to various groups of workers and hoped that the new generation of workers shall benefit from integration of eSHRAM with the ASEEM, UDYAM and NCS portals so far as job and skill development opportunities are concerned. 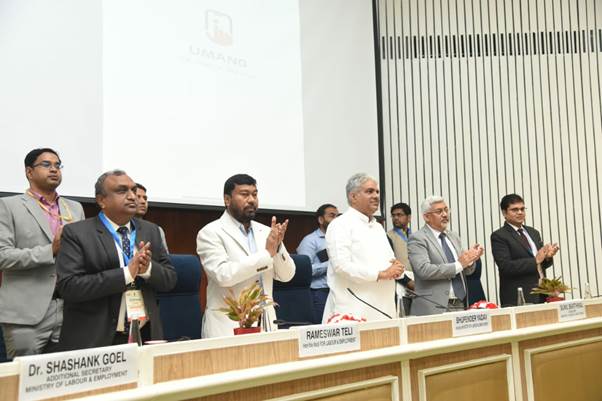