New bench in Supreme Court to consider petitions related to employee pension scheme.  With this, the judgment in the case is likely to be extended again.  After a long break, a three-member bench headed by Justice U.U. Lalit considered the petitions yesterday.  Justice S. Ravindra Bhat expressed his willingness to withdraw from the bench following the remarks made by the EPFO counsel during the hearing.  Later, Justice U.U. Lalit postponed taking up the matter to July 15 stating that a new bench will be formed without Bhatt. But there will be no argument then.  Instead, it will be clarified when it will be heard.

In August last year, the two-member bench which considered the matter for two consecutive days had clarified that the legal issues in it should be considered by a three-member bench.  It is after that the bench comprising judges U.U.Lalit, S.Ravindra Bhatt and Sudhanshu Dhulia heard the petitions.

Justice Ravindra Bhat himself suggested that he may either hear the appeals against the Rajasthan judgment separately or recuse himself from hearing the case.  Then Justice U.U. Lalit who was on the bench held a discussion with fellow judges.  It was informed that petitions against the Kerala High Court verdict will be considered first.  Justice Lalit also pointed out the practical hurdles in making a three-judge bench after a long wait.

“There are only 2 courtrooms where a three-member bench hears the case.  One of these is for the Chief Justice and the other is presided over by me. I need time to communicate with Chief Justice” –  Justice Lalit said while posting the case to 15th. He said that going to a new bench will cause the case to drag on again.  Nishe Shankar Rajan appeared on behalf of PF members.  The court did not allow the request to restrain various High Courts from issuing various orders related to PF.

The case is against the Kerala High Court judgment of 2018.

In September 2014, EPFO introduced an amendment by removing the option of getting pension proportional to salary and calculating pension based on 60-month average instead of 12-month average salary.  In October 2018, the High Court of Kerala struck down this amendment and ruled that the orders passed by the EPFO against salary-proportional pension would not stand.  The petitions filed by the EPFO and the Labor Ministry against this are being considered by the court.  Earlier, the Supreme Court dismissed the petition of EPFO.  Subsequently, a review petition was filed.  The three-judge bench will consider the legal issues raised in this and in the orders of various High Courts. 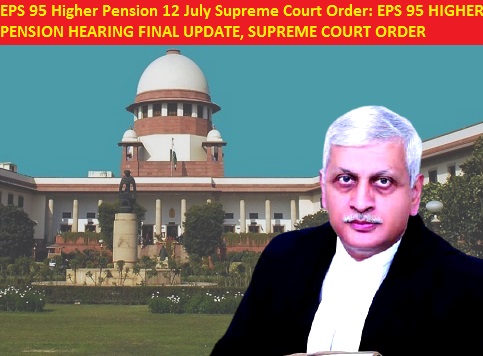