Main Dispute before Court of law besides some other prayers:

2) SLP filed by the Govt of India in support of EPFO on financial exchequer.

3) Besides 67 respondents ( directly filed Slips or impleading ) but main respondent is Kerala High court petitioners who won the case in Kerala.

EPFO only appealed against Kerala High court Judgement, so the three judges bench first of all heard the argument s of EPFO lawyer Sri Aryam Sunderam on first two days along with Govt of India lawyer Sri Vikramjit Benerji. The essence of their arguments are:

1) EPFO lawyer cited one high rank officer’s benefit if permitted him to claim pension on his higher wages — he will pay differential amount of contribution 38 lakhs with interest to EPFO and walk away with arrears of 41 lakhs plus monthly pension. He also argued vehemently against the retrospective effect of pension benefit.

High rank officer’s are only 15 to 20 percent among EPS-95 pensioners. Further those retired after 2014 will receive arrears of pension for small period ie 5 to 6 years but depositing differential amount with interest calculating for a period of 15 year and more. It means he is remitting to EPFO huge amount and receiving very small amount as a arrears.It is not only in the case of high rank officer’s but also in the case of every pensioner who retired after 2014.

In additional to this widow pensioners have to pay differential amount of contribution on higher wages but receiving pension half of their eligible pension.It means depleting pension fund does not arise. More over both pensioners ie. husband and wife died their contribution lakhs of rupees accumulating in pension fund without payment of any pension.

2) Next the Govt of India ASGI Sri Vikramjit Benerji emphasized on financial impact if pension on higher wages allowed and he has gone to the level that the poorer vulnerable section of Society will suffered due to depleting fund.

Comment on this: When OTis Elevator Employees’union filed the case in Madrad High court against implementation of this EPS-95 Scheme , the Govt argued in the court it is a welfare /social security scheme but now it is arguing against Social security of pensioners without revision of pension in accordance to the cost of living . How pensioners can live with Rs1000/- or less per month at present cost of living .

Next Supreme court allowed Kerala High court batch cases lawyers Sri Kailashnath Pillai to argue and he presented the case very effectively regarding repercussions of amendments dt 22-8-2014, deletion of para 11(3), loss of pension on calculation of 60 months instead of 12 months and finally placed the data that financial liability is only Rs 15000/- crores only and not hypothetical figure of Rs 15 lakhs crores. He also explained to the court that accumulation of EPFO fund is increasing gradually and not depleting. Further he brought to the notice of court that even daily wages workers earns Rs1000/- daily whereas these pensioners are earning less than this amount monthly, hence the review petition of EPFO and Govt SLP be dismissed.

EPFO’s role under the act is that of a fund manager.The central Board of trustees are the trustees of the fund.The employees are the beneficiaries under both PF and pension scheme.In the instant case the GOI, CBT and PEIC have all committed to compliance with R C Gupta judgement. How can EPFO now be permitted to override the consisted stand taken by the Trustees which actually taken for the benefit of the employees.

All employees covered under the Employees provident fund whether working in exempted or un- exempted establishments are ipso facto necessarily member of pension scheme (EPS-95) as per the existing legal framework. He also said exempted and non- exempted doesn’t make any difference as money ultimately goes to pension fund. The concept of a cut of date for every of Joint option to contribute on actual salary over the ceiling amount is against to both the EPF para 26(6)

EPS -95 para11(3). Actuarial Report is ex-facie false and misleading and contrary to RTI replies obtained from EPFO. The pension fund as its currently stands is sufficient to disburse any enhanced pension to employees based on RTI information. More over 2.6 lac EPS members have died after RC Gupta judgement without receiving revised pension on actual salary made applicable by EPFO vide circular dt 23-3-2017.

3) Another sr.lawyer Sri Venkataramani presented his arguments very interestingly against review of RC Gupta judgement . He said on PF Act there is no difference between exempted trust and non-exempted trust.Social securities are applicable even in all other countries also. All of a sudden bringing amendments which will deprive large number of section is not at all correct. This amendment of 22-8-2014 shifts the burden of 1.16% from Govt to individual. Rebooting financial sustainability argument of EPFO is violation of our Fundamental Right. Artificial decisions have been taken ignoring constitutional arguments.

4) One more sr.advocate Sri Vikas Singh had made a strong arguments by drawing attention of the court that there is no difference between exempted and non-exempted establishments under this pension scheme

He also referred the earlier judgement of Supreme court wherein it has been held that paucity of finds cannot be a ground to deny accrued vested rights to employees.

5)Next Ms Meenakshi Arora argued exceptionally well and placed several data before the judges to prove that the corpus of EPFO has gone up from Rs 8,253 crores to Rs 3,93,604 crores and EPFO is paying pension only out of interest earned from employees contribution and not out of corpus. The principle amount always remains in the corpus fund itself.

Now the judgement is reserved after six days proceedings held in Hon’bl Supreme court. It may pronounce at anytime.

dt 12-10-2018 and may not speak about other prayers out of this Kerala High court Judgement.

2) EPFO prescribed cut-off date and prevented these pensioners while in service for submission of option to get higher pension as per provisions of EPF Act 1952 and EPS-95 Scheme and proved before all courts it is illegal. Supreme court also dismissed all appeals made by EPFO against these judgements.

3) Before Supreme court now EPFO changed their strategy by focusing arguments on Financial Viability instead of provisions of EPF Act 1952 and EPS-95 Scheme because they lost every case in almost all High courts and their appeals dismissed by Supreme court.

In the day today proceedings when Sri Vikramjit Benerji , ASGI argued that now after the retirement if pensioners asks for retrospective benefits it will not be justified, then Hon’bl judge Sri U U Lalit said that there are number of judgements allowing benefit retrospectively and simultaneously there are judgements denying it. But as far as my knowledge the Division Bench of Himachal Pradesh only denied the benefit of pensioners but this judgement was superseded by the Supreme court in RC Gupta case.

Now this issue is reopened and hanging before Supreme court for Judgement whether to allow pensioners to opt for pension on higher wages with retrospective effect or not ?

4) The second issue before Supreme court is allowing pensioners of both exempted and non-exempted establishments to claim pension on their higher wages?

If the Supreme court admitted both in favour of pensioners, the lakhs of pensioners are cheerful besides declaring the Amendment 2014 GSR is illegal.

Hope that we may hear good judgement in favour of lakhs of pensioners from Hon’bl Supreme court soon. Wait and see. 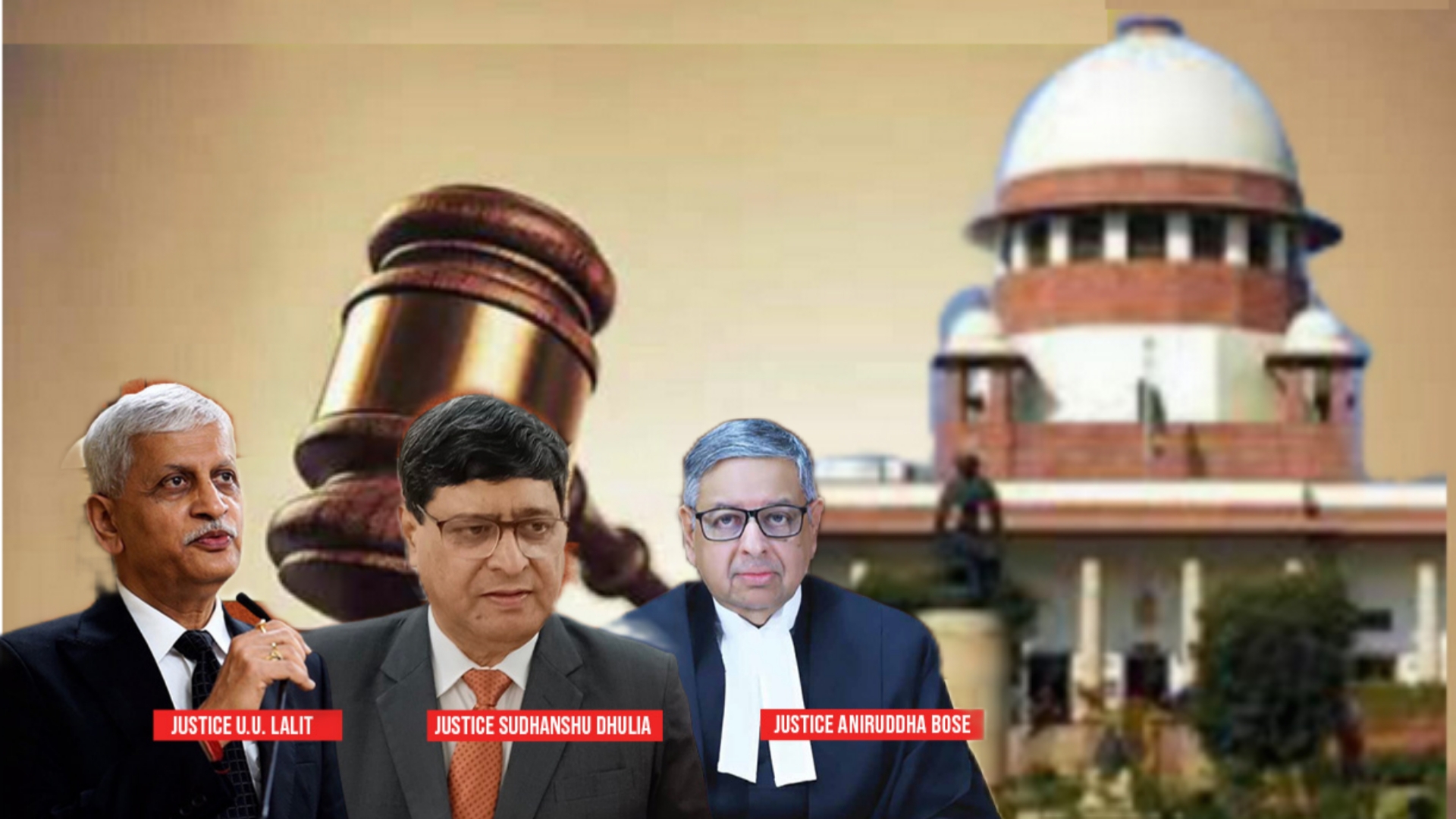