The said Circular was issued after due approvals from CBT (19-12-2016) & Ministry of Labour & Employment (16-03-2017).  In pursuance of this Circular EPFO started paying enhanced revised pension after getting back differential amount with interest between actual salary and ceiling amount from the retirees/employees.  Accordingly, in compliance of the circular dt.23-03-2017, upon exercising option under Para 11(3) in 2017/2018, pension of 24,672 retirees had also been revised.

Although all the retirees/employees were covered in Circular dated 23-03-2017, but vide another Circular dt.31-05-2017 without any approval from CBT &MoL&E, Pension Division of EPFO restricted the benefit of Higher Pension only for pensioners from unexempted establishments; which forced the poor pensioners / employees of exempted establishments into unwanted litigation.

Vide judgment dated 04.11.2022 in EPFO v. Sunil Kumar B & Ors. The ratio of R.C.Gupta judgment has been upheld and EPFO has been directed to implement the same within 8 weeks.  The Hon’ble Supreme Court has unequivocally held that there was no distinction between the employees of exempted establishment and Un-exempted establishments since they stand on equal footing for EPS’95.

The Hon’ble Supreme Court vide its judgment dated 04.11.2022, while upholding decision of the Hon’ble Delhi High Court in para 37 of the judgement has dispensed with the distinction between exempted and unexempted establishment thereby clearing the path for resuming implementation of R.C. Gupta Order for retirees/employees of exempted establishments as well.  The relevant extract of the judgment is quoted below for your ready reference:

So far as the question of exercising option under Para 11(3) of the Scheme is concerned, the Hon’ble Supreme Court in para 41 of the judgment dt.4-11-2022has re-iterated the decision of R.C. Gupta Order.  The relevant extracts from para 41 are quoted below:

“41. XXXXXXXXXX As we have already discussed, in case of R.C Gupta (Supra), it has been specifically held that there was no cut-off date in proviso to paragraph 11(3) as it stood before the 2014 amendment.  In our opinion, the interpretation given to the proviso to paragraph 11(3) prior to 2014 amendment does not require any reconsideration.  We agree with the reasoning of the two-judge Bench of this Court on this point, as expressed in the said judgment.  As there was no cut-off date to be contemplated prior to the 2014 amendment, limiting the entitlement of enhanced pension coverage to those employees only who had already exercised an option under Clause 11(3) of the unamended scheme would be contrary to the ratio of the decision of this Court in the case of R.C. Gupta (supra).”

The Hon’ble Supreme Court excluded Pre-01-09-2014 retirees from the operation of this judgment since they stood already benefitted by the earlier judgment rendered in R.C. Gupta (dated 04.10.2016) and restricted the application of the latest judgment dated 04.11.2022 to post-01-09-2014 retirees & serving employees as they were adversely affected by GSR 609 which amended the EPS, 1995. The pre-01.09.2014 retirees were not impacted by the GSR 609 and their rights stood already crystallized under the earlier R.C Gupta’s judgment.

In view of the above, we earnestly request your good self to start the process of implementation of the judgment of the Hon’ble Supreme Court in R.C Gupta v. UOI (2020) 13 SCC 506 in respect of pre-2014 retirees/employees and judgment dated 04.11.2022 in respect of post 2014 retirees/employees in its true spirit for old aged hapless retirees of EXEMPTED establishments at the earliest. 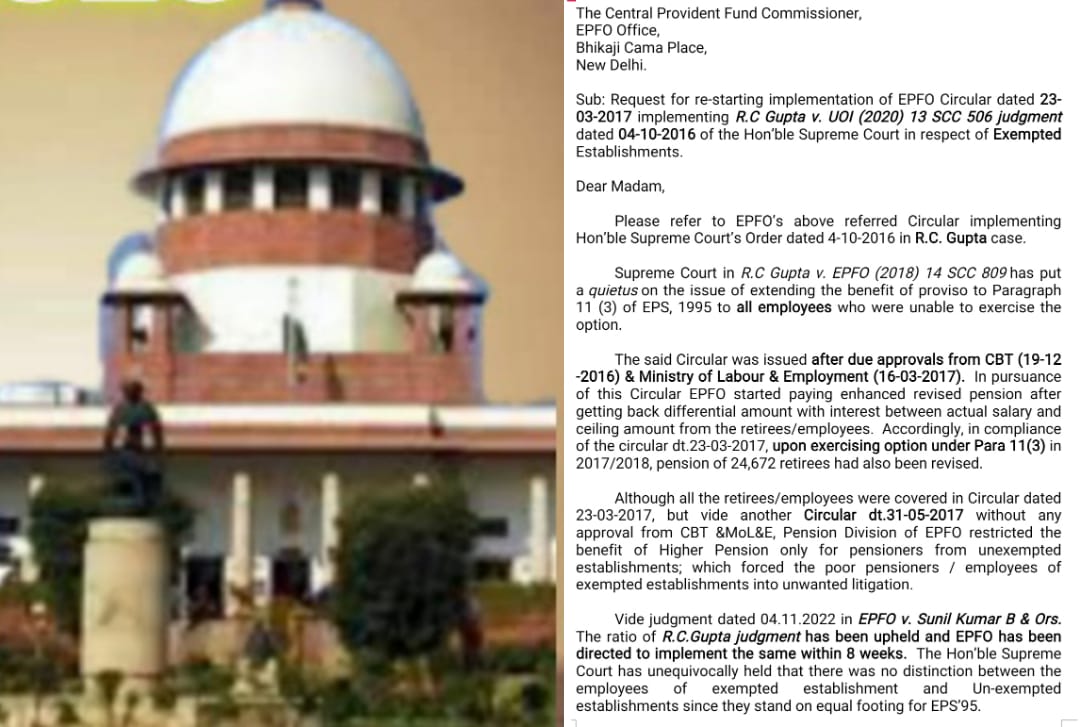