In his address, Prime Minister, inter alia, mentioned that India’s labour force has a huge role to play in realizing India’s dreams and aspirations to build a developed nation in the Amrit Kaal.

The Union Labour Minister, Sh Bhupender Yadav gave an outline of the Conference and requested State Governments’ to give views and suggestions.

The first thematic session, viz, integrating the e-Shram portal for onboarding social security schemes run by Central Government & State Governments to universalize social protection to workers and to improve employment opportunities for all, was deliberated upon. Over 28 crore unorganized workers from over 400 occupations have already been registered on the e-Sham portal.  SOP is being prepared for which a committee under Ministry has been constituted along with members from States as well. Based on the SOP finalized by the committee, e-Shram data will be shared with States and States will return verified data. This will help States in making policy-driven decisions and implementing welfare schemes. States expressed their views and gave suggestions on the theme.

The second theme discussed was Swasthya se Samriddhi for improving medical care and services through ESI hospitals run by State Governments and integration with PMJAY. Union Labour & Employment Minister mentioned that ESIC is committed to extending medical facilities to all districts by December 2022, undertaking the construction of 76 new hospitals, and ready to recruit specialists for State-run ESI hospitals.  States stated, inter-alia, that ESIC is a standing example of cooperative federalism where states and central institutions work together for providing healthcare services to the laborers. States welcomed the revision in norms for setting up hospitals. States were requested to complete the formation of societies at the earliest for easy decision making, inputs for revision of norms for setting up new hospitals, and modalities for setting up medical colleges & hospitals in aspirational districts.

The third thematic session was on the framing of rules under four Labour Codes and modalities for implementation along with the development of Portals for licensing, registration, returns, inspections, etc. The last theme ‘” Vision Shramev Jayate @ 2047” focused on a just and equitable future of work, social protection for gig & platform workers, gender equality at work, and better opportunities to women. Issues in these themes were ease of doing business and ease of living for workers, decriminalization of offense under Codes, development of an integrated portal for registration, one-time license, compliance, and returns; challenges in ensuring social security to Gig and platform workers, and ways to address these; improving female labor force participation; skilling, lifelong learning aligned with future of work; skill gap mapping and facilitation of planned migration; sustainable financing of social security schemes. States gave important suggestions and status of rules making. 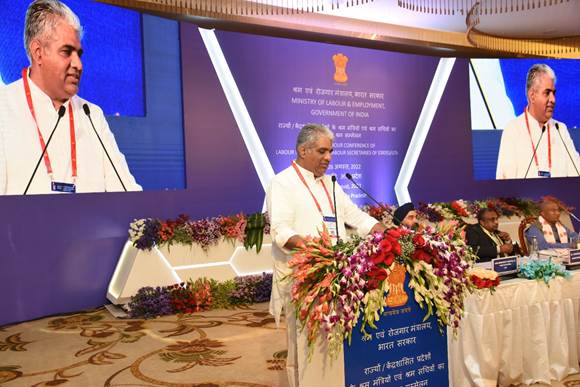